The flag is carried on expeditions of such unusual character that their successful accomplishment adds real distinction to the Society and makes a permanent contribution to the world's store of geographical knowledge; or the bearer is engaged in work of a professional, geographic, or scientific nature that is new, is original, or represents a "first".

2020-2021 Sunniva Sorby
Carried the flag to Svalbard where she and her partner Hilde FaÌŠlun Strøm spent 17 months observing, recording and broadcasting extreme climate change events as they happened in high–Arctic real time. 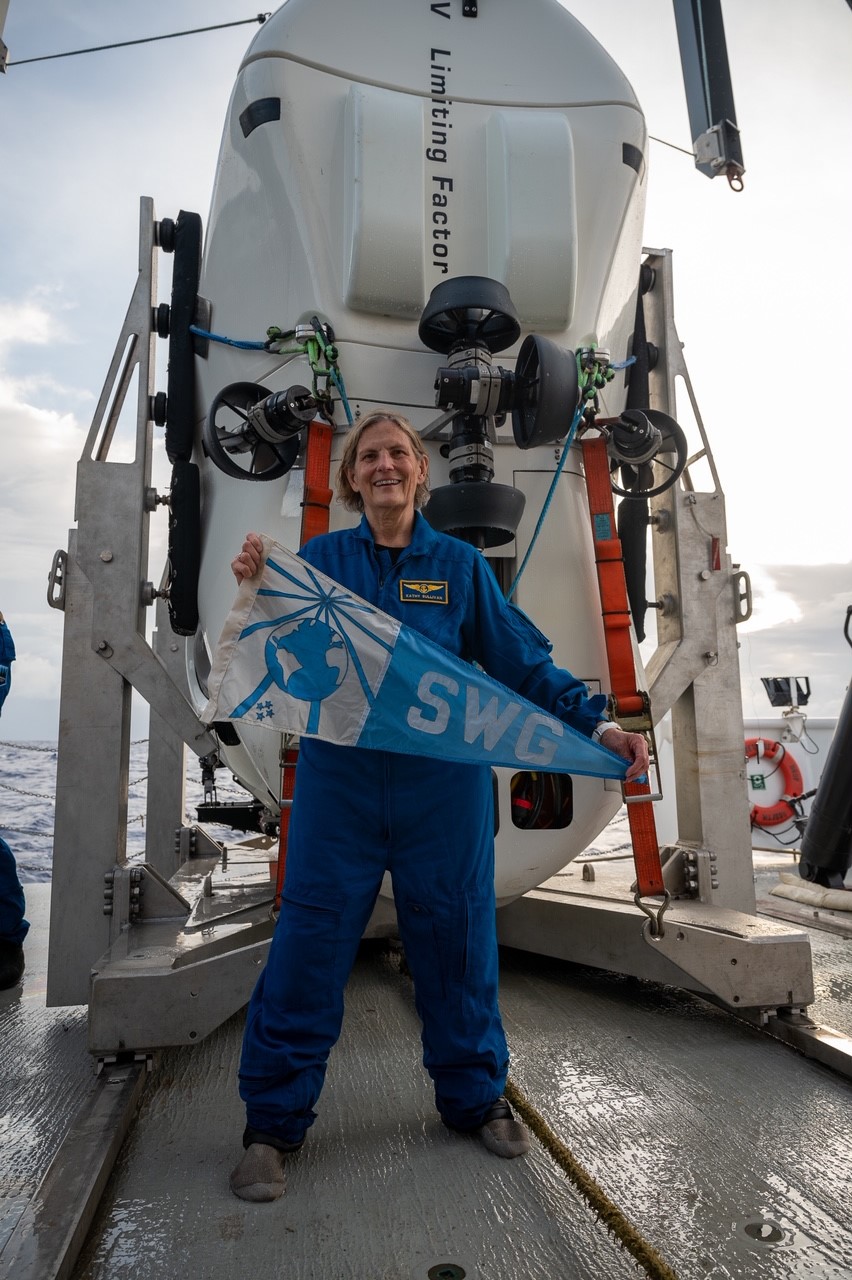 2019 Alison Jones
Carried the flag to document today’s condition and usage of Egypt’s Nile River from Lake Nassar and Aswan to Alexandria and the Nile Delta.

2019 Rhea Banker
Circling, under sail, around the Svalbard Archipelago, Rhea Banker traveled from Longyearbyen at 78 degrees north and rounded Verlegenhuken, the northernmost point of Ny-Alusund, at 80 degrees north. She photographed the changing conditions of this pristine landscape, which has become one of the fasted-warming locations in the Arctic. 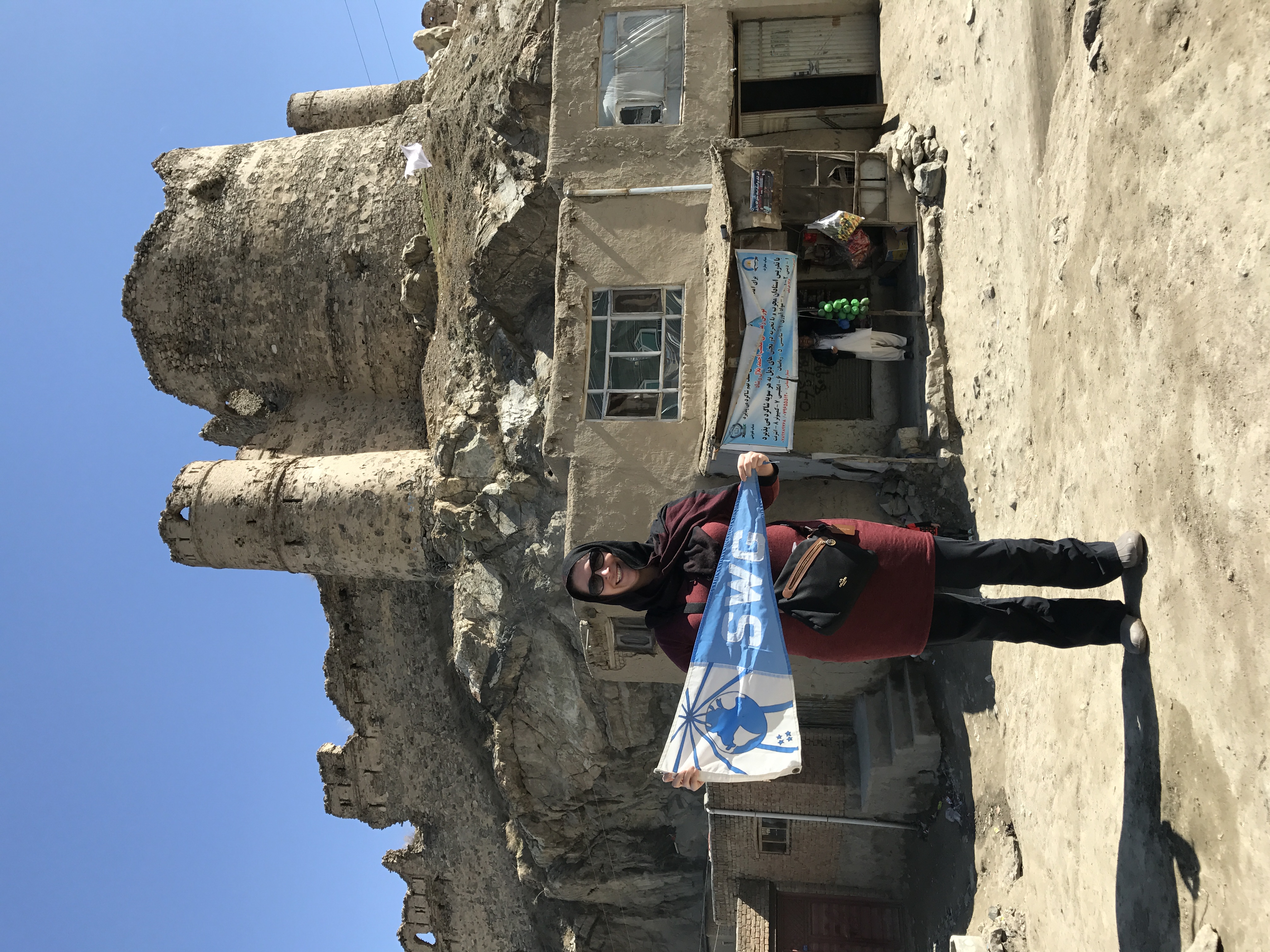 Carried to Bala Hissar, an active military base with a very strong historical/archaeological legacy.

2016 Maria Pia Casarini
Carried out on board the Norwegian RV Lance to the Barents Sea to research and determine forces governing the break-up of ice by waves.

2013 Carole Hickman
Carried to the Tjörnes Seacliff Shellbeds of Northern Iceland to "return" important museum specimens to a field setting that has assumed new scientific importance.

2009 Deborah Atwood
Carried to the top of Mount Kilimanjaro as part of a team conducting high altitude physiological research.

2007, 2011 Martha Hayne Talbot
Carried on the Nam Theun Watershed Expedition to a previously unexplored area of the Anamite Mountains, Laos, Vietnam in early 2007 which explored and recorded threatened species and vegetation and again in 2011.

2005 Karen Huntt & Michele Westmoreland
Carried to Papua New Guinea and the Solomon Islands, retracing the steps of portrait painter and SWG member Caroline Mytinger in the 1920's and taking photographs and videotapes to document cultural changes in the ensuing 80 years.

2003 Ann Parks Hawthorne
Carried to the Southern Ross Sea area of Antarctica to photograph geographical features for a historical gazetteer.

1997, 1993-1994 Pam Flowers
Carried in 1997 on the first documented solo winter round trip by surface to the Magnetic North Pole from Resolute Bay in the Northwest Territories, Canada. In 1993-1994 on a 2,500-mile solo dog-sled expedition across Arctic North America, retracing the 1923 Firth Thule Expedition, marking the first time a woman or an American completed the route solo.

1993, 1992 Elizabeth McKnight
Carried in 1993 on a three-month 3,000-mile expedition across Tanzania, Burundi, and Zambia, retracing the last expeditions of Dr. David Livingstone and documenting changes. Carried in 1992 to Rio Roosevelt in central Brazil as leader of an expedition with first two women to traverse the 950-mile river discovered by Theodore Roosevelt in 1914.

1989 Patricia V. Rich
Carried to an underground excavation in Dinosaur Cove, Victoria, in southern Australia to excavate rocks and fossils, including those of polar dinosaurs, uncovered after 105 million years.

1985 Tanya Atwater
Carried to the deep ocean about two miles down, 300 miles northeast of the Galapagos Islands, to explore rifts in the ocean bottom in an area where plates are moving apart and that contains the clearest known example of a "propagating rift" & one which is extending itself past another, shutting off the latter.

1984 Ellen Sparry Brush
Carried in 1984 to Chile and Bolivia to study the world's highest lake, Licancabur Crater, and its environs.

1984 Mercedes S. Foster
Carried to Carro de la Neblina at the southernmost tip of Venezuela where to study many aspects of the evolutionary process and to document with specimens the fauna of this plateau 9,000 feet above the rain forests along the Venezuela-Brazil border.

1984 Kathryn D. Sullivan
Carried into space as a member of the Challenger shuttle crew on a nine-day mission, becoming the first American woman to "walk" in space while participating in a 3-hour extra-vehicular experiment on the feasibility of satellite refueling.

1983-1984 Sara Bisel
Carried to Herculaneum, Italy, for an anthropological study of skeletal material dating to the eruption of Mount Vesuvius, bringing a wealth of new details of how people lived, as well as died, in the lost cities of Vesuvius.

1981-1982 Mary Livingston Ripley
Carried to the remote Namdapha Valley in Arunchal Pradesh, India, on an environmental survey with the Smithsonian Institution.

1971 Edith "Jackie" Ronne
Carried to the South Pole to participate in the 60th-anniversary celebration of Amundsen's first reaching it, and commemorating the year she spent as the first woman expedition member (as historian and newspaper correspondent) in the Antarctic with the Ronne Antarctic Research Expedition, 1946-48. The Ronne Ice Shelf, the world's second largest, was named for her.

1968 Jeanne M. Gurnee
Carried to Guatemala's Alta Verapaz area on a speleological expedition sponsored by the Explorers Club, when they descended in a cave to a site undisturbed for 1,000 years which contained human skeletons, pottery, and altar-hearths.

1966 Marie Poland Fish
Carried to the Canary Islands and the coast of West Africa on a Narragansett Marine Laboratory oceanographic expedition to monitor and record underwater choruses of fish, whales, and porpoises.

1964 Gladys Owen
Carried to Oaxaca, Chiapas, and Yucatan, Mexico, to study the effects on native populations of the newly improved systems of transportation there.

1962 Eugenie Clark
Carried in 1969 to lead the American delegation participating in the international Israel South Red Sea Expedition, to contrast studies of the coral reef environment with the mangrove areas in the vicinity of Massawa, Eritrea, with her work centering on sharks and eels.

1958 Marie-Helene Sachet
Carried to Clipperton Island, off the west coast of Central America, on a biological expedition sponsored by the Scripps Institution of Oceanography to collect plants, study vegetation, and work on geology and soils.

1957, 1953, 1951, 1948 Marion Stirling Pugh
Carried in 1957 to the Pacific Coast of Ecuador to excavate pottery figurines. Pugh holds the distinction of being only member to carry SWG's flag four times, all on archaeological expeditions with her husband, Matthew Stirling, under the joint sponsorship of the National Geographic Society and the Smithsonian Institution. Carried in 1948, 1951, and 1953 to Panama, for archaeological work in first Chiriqui and Veraguas provinces, then Colon province, and finally on an ethnological visit to the Choco Indians.

1957 Dorothy Schweitzer
Carried on her boat on travel based on Bora Bora to the Society Islands to study coral reefs and their creatures and the people of the area and to study marine biology.

1956, 1955 Margaretta Hopkins
Carried in 1956 on a hunting expedition with her husband to French Equatorial Africa. Carried in 1955 on a hunting safari to Tanganyika, where, alone with a white hunter and his staff, she was the first woman to kill the rare swamp-dwelling sitatunga antelope.

1954 Ardelia Ripley Hall
Carried to South Korea on a mission for the Departments of State and Army to survey and photograph Korean War damage to museums, palaces, temple-monasteries, and ancient sites.

1953 Irene Morden
Carried on the Morden African Expedition to Southwest Africa to collect specimens of native material representing a cross-section of daily life, for the American Museum of Natural History.  She was the first western woman to travel to Etosha Pan and the remote Skeleton Coast.

1940, 1937 Lucile Quarry Mann
Carried in 1940 to Liberia on an expedition with her husband, National Zoo Director William Mann, to collect live specimens for the National Zoo, enduring rough travel by hammock, rickshaw, dugout canoe, and on foot. Carried in 1937 with her husband to the East Indies as only woman on the expedition, which collected live animals, birds, and reptiles for the zoo.

1936 Margaret Mead
Carried to Bali and New Guinea in connection with her anthropological research among the primitive tribes, documenting village life with still and moving pictures.

1936 Mary Vaux Walcott
Carried to Japan for botanical research and collection of wild flowers for the Smithsonian Institution.  She made watercolor paintings of the flowers.

1935, 1932 Amelia Earhart
Carried on her flight from New York to Washington to receive National Geographic Medal, but it commemorated her solo trans-Atlantic flight on May 21, 1932.

1934 Gloria Hollister
Carried when she was one of the scientists working with William Beebe's Oceanographic Expedition, when she descended in the bathysphere to 1,208 feet, the greatest depth attained by a woman to that time.

1932 Marie Peary Stafford
Carried to Cape York, North Greenland, to dedicate a memorial to her father, Admiral Robert E. Peary. As first white baby born in the Far North, she partially grew up with the Eskimos and was called "Snow Baby."